Our international coaching staff, with over 35 years of experience coaching elite and national teams, provides world renown training methodologies and mentorship at all ages and levels.

When a player enters our program they immediately have a sense of acceptance, well being, peace and fulfillment as their tennis is part of a bigger life mission. We work on a weekly basis to develop a love and respect towards our fellow competitors, coaches, and parents, while learning about our life purpose tied in with our passion for the game that we are playing.

Match Point Impact offers players both clay and hard court training options in what is considered to be one of the toughest year round training locations in the country (South Florida).  Why is it so tough? Well almost everyday it is Hot, Humid and Windy requiring players to work extra hard to get the most out of their games and themselves.

These players were started on a professional pathway from a very young age. They were self driven and had a passion to play the game of tennis.

“Scott has done an amazing job with all three of my boys leading & guiding them physically, mentally, and spiritually.”
— Chris Evert # 1 WTA

The Student/Athletes listed below have been coached by Scotty Williams, have or still are making an impact in NCAA I, II, III College Tennis 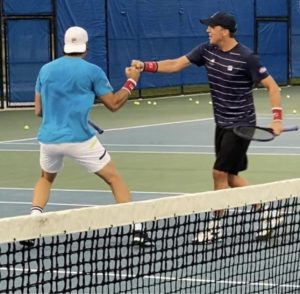